Jobs you can get at a recording studio 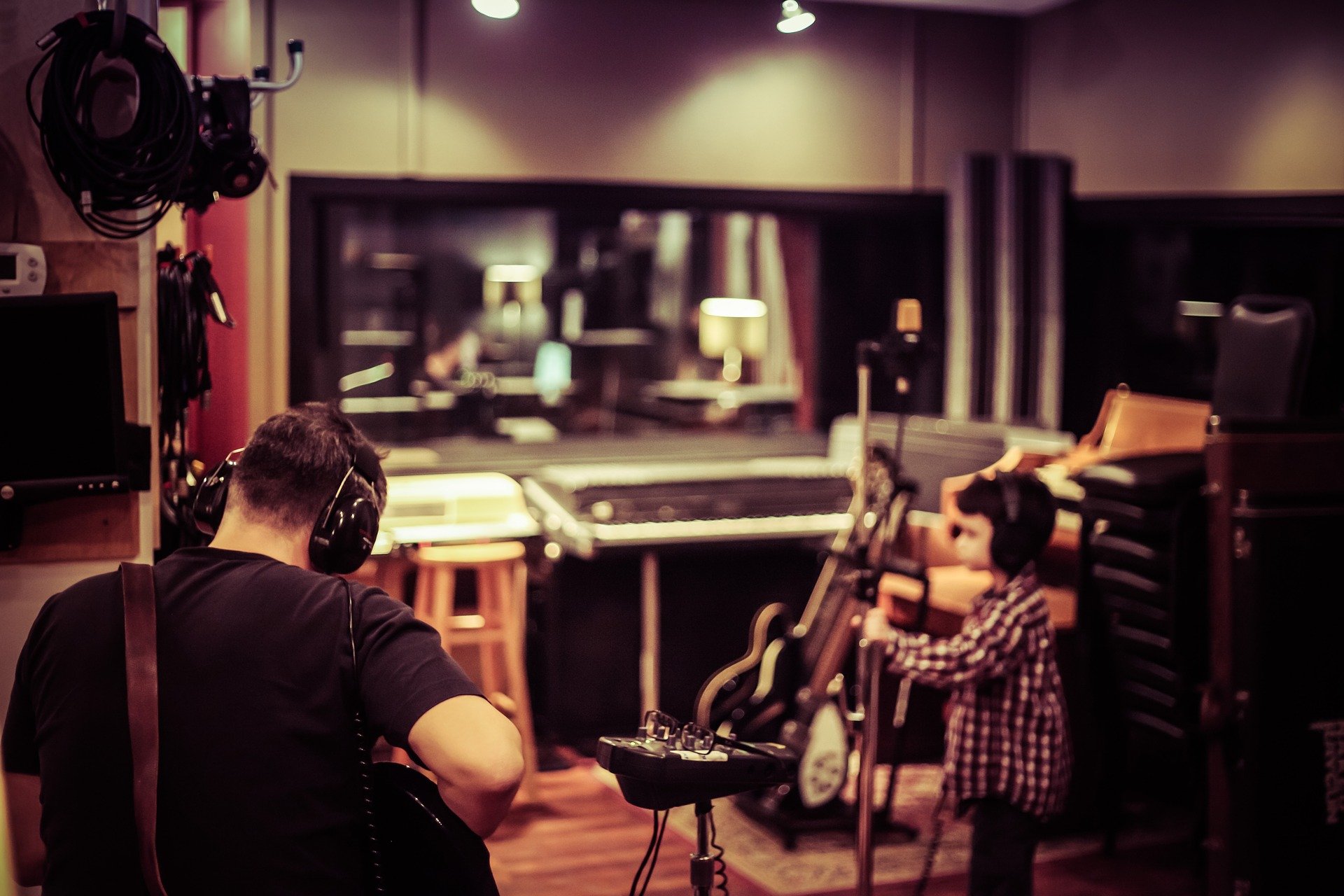 Do you dream of working in the music industry even though you are not a performer? Do you find the sound effects you hear in films fascinating and want to be part of making them?

Back in the day, working in a recording studio looked different. Not to mention that it was a lot harder. Engineers wore lab coats, worked with gigantic machines and got their hands dirty to actually engineer and build the stuff they needed for the job.

Fast-forward to today and technology will enable virtually anyone to produce music – or put a human on Mars – from their own bedroom.

But this will not happen in a blink of an eye or without putting a serious effort into knowing what you want and doing what it takes to have it.

So, if you want to have a career in the music industry, we invite you to read this article. And learn about the different kinds of jobs you can land in a recording studio.

Every recording studio needs a runner. An essential employee who makes the operations go smoothly.

Studio runners are typically responsible for the cleanliness and tidiness of the studio. They also ensure that the kitchen is fully stocked, pick up meals, receive packages, and handle deliveries.

In addition to generally supporting the rest of the team by organizing workstations and keeping supplies stocked, studio runners also help with miscellaneous administrative tasks such as scanning, filing, and printing.

Thanks to the nature of the job, the studio runner gets to know every inch of the studio, not to mention the opportunity to learn how everything works. For this reason, it is an ideal entry point for anyone aspiring to build a career in the industry.

Most positions in a recording story require an extensive level of skills and experience that you can only get through time. When you work as a runner, you have an advantage over the outsiders to build the relationships and the skills needed for an advanced job.

In fact, this is where some of the most iconic audio engineers have started in their careers.

Music producers understand both the creative and commercial side of the business. Their job is to manage and oversee the recording and production process.

They also build relationships with musicians and record labels and create an environment that enables artists to create and express themselves.

Therefore, music producers are involved in many details of a recording project, including but not limited to putting together musical ideas, choosing the material to record, hiring musicians, working with artists and musicians on lyrics, balancing the recording budget, and influencing mixes.

The job of a music producer is demanding and requires involvement in every step of the musical process. But if you want to be one, you should learn foundational audio and music concepts and familiarize yourself with various types of software. Moreover, to have a reputation as a great music producer, you should also have good knowledge of engineering and mixing.

As an aspiring music producer, we encourage you to look for inspiration and insights from the stories of the world’s most famous and successful music producers.

How about you start with Quincy Jones? A legendary producer who produced three of Michael Jackson’s most successful albums: Off the Wall (1979), Thriller (1982), and Bad (1987). As well as the famous 1985 charity song “We Are the World.”

In the early fifties, Jones studied briefly at the prestigious Schillinger House (now Berklee College of Music) and became a freelance arranger after touring with Lionel Hampton as a trumpeter and arranger.

Then, he worked in Paris for the Barclay label as an arranger and producer in the late 1950s. During that time, he continued to compose.

When he came back to the United States in 1961, Jones became an artists-and-repertoire director for Mercury Records. In 1964 he was named a vice president of the label, making him the first African American to hold a top executive position at a major American record label.

In the 1970s, Jones worked for the A&M label and moved increasingly away from jazz toward pop music. During this time, he became one of the most famous producers in the world.

In 1980 he started Qwest, his own record label.

Quincy Jones received more than 75 Grammy Awards nominations (and won more than 25). He was also nominated for seven Academy Awards and received an Emmy Award for the theme music he wrote for Roots (1977), the television miniseries. In 2013 Jones was inducted into the Rock and Roll Hall of Fame.

While producers manage the recording process, studio managers are responsible for overseeing the day-to-day operations of the recording studio itself.

They work closely with musicians, producers, and band managers when they rent the space.

Studio managers are also responsible for hiring skilled and qualified audio engineers to run the equipment.

The position itself doesn’t require technical knowledge or musical background as much as business and management skills.

Audio engineers, or sound engineers, play a significant role in producing a recording or live performance.

They use various tools and techniques such as audio effects, equalization, mixing, and sound reproduction and reinforcement to capture and manipulate sounds.

Their job is to combine musical instruments and technology to create a sound for movies, television, video games, music, radio, and commercials, among many other things.

As an audio engineer, you will combine traditional and tech-savvy recording techniques to record music, working with analog and digital audio, compressors, microphones, and signal flow.

Additionally, you will be responsible for organizing recording sessions and repairing any technical problems when they arise.

To land a job as an audio engineer, you need to become well-versed in multiple recording technologies and develop file management skills. Additional training in mixing and editing may also be beneficial.

If you are looking for an affordable and convenient way to acquire the skills that will make you an awesome audio engineer, check out our sister company, Mello Skills! (Link right here) It offers professional online courses (in Arabic) you can participate in at your own pace.

Sound designers find or create audio for a wide range of productions, including but not limited to film, television, radio, video games, and commercials. Their job starts with going through the script and noting the sounds to create in the recording studio.

Such sounds might be sound effects, such as explosions, or atmosphere sounds, such as traffic or the background noise of a coffee shop.

To be a sound designer, you need to be skillful at creating audio effects from hardware and software devices, program synthesizers, digital instruments, and custom effects chains.

Did you know that the actual sounds made by the actors or the objects used in a film do not always sound the same when recorded as they do in real life? That is why we have Foley artists. They are responsible for mimicking some of the sounds of everyday life for film, television, or other types of media. These might be the sound of walking, clothes swishing, kissing, or breaking glass, for example.

Foley artists use random objects to create these familiar sounds. After recording these sounds, they take them to the sound editor, who takes care of the rest.

After all of the sounds involved in a project have been recorded, sound editors clean up the recordings and fix any issues they find. Then, they send all those recordings to the sound mixer.

And although this sounds similar to the role of an audio technician, the well-established recording facilities typically employ dedicated editors to handle post-production tasks.

Audio Technicians work alongside artists and producers to create the finished recording. Their main task is to ensure the quality of the recording from a technical standpoint.

This position requires technical knowledge of modern studio equipment such as DAWs, mixing boards, and other recording equipment.

As a sound mixer, your job is to operate the mixing console and control the volume and quality of the audio. Your job becomes crucial when more than one microphone is involved in the recording session.

Sound mixers are also responsible for editing all components together, such as for a film or television show. While doing so, they are responsible for ensuring optimum audio levels and dealing with issues that affect audio quality.

To work as a sound mixer, you will need advanced knowledge in sound mixing technology. And the ability to make real-time sound adjustments as the recording takes place.

Instrument techs work primarily with musical instruments. Some techs focus on a single one, while others may specialize in two or more. However, in some cases, instrument techs are responsible for all the instruments in the studio.

To work as an instrument tech, you need to have extensive knowledge in using, setting up, and maintaining musical instruments and music equipment.

Remember! If sound production is not your cup of tea, you can always go for a job on the other side of the glass as a singer, musician, actor, or voice-over artist.

Recording studios need talents, engineers, and other professionals to operate. Therefore, they are places with a lot of opportunities. Each position in a recording studio is responsible for a specific task. However, they all collaborate to produce the wonderful music and sounds we hear every day.

However, the availability does not guarantee that you will land the job of your dreams unless you work hard on developing the skills required for it. Thanks to the internet, finding the resources to learn and develop your skills have never been easier. Take every opportunity you find to learn, build your experience, and improve your skills. But remember to remain focused and avoid being distracted by the abundance of choices and resources.

Do you want to pursue a career in the music industry? Mello can help you get set with what it takes to work in a recording studio. Contact us today and unleash your potential!